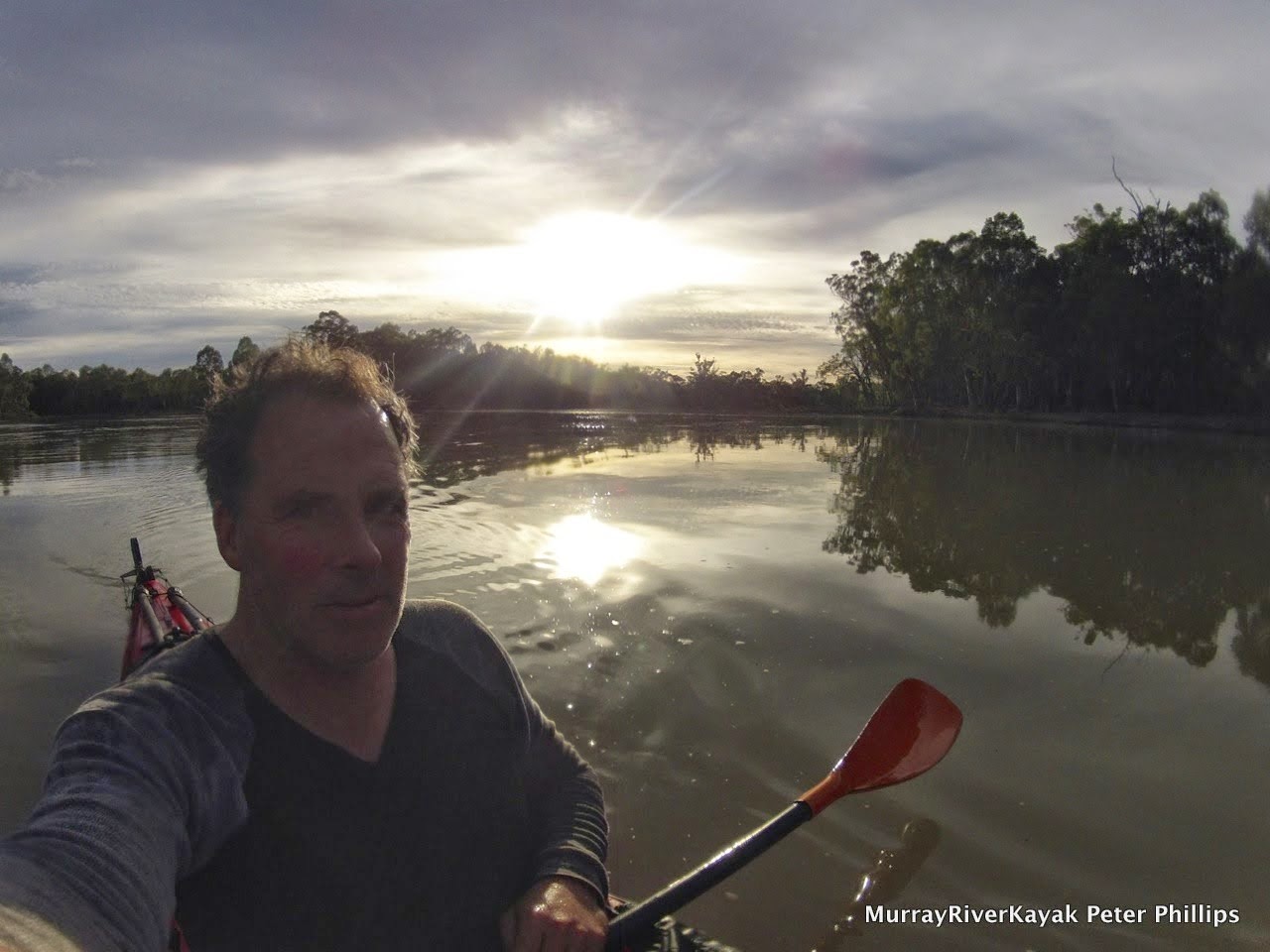 A great day’s paddle today. Almost my PB. 80km and in camp by 3pm. Must do more of these early starts.

The plan was to get off early today since high temperatures and strong South-Westerly winds are expected in the afternoon. South-West is the direction I will be headed in the afternoon. So the best thing it seems to me would be to be where I need to be by about 2pm. I can then sit out the heat in the water. Just have to pick a safe beach. I don't have the most up to date forecast as I have no reception here, but I can feel that something is building in the air.

I managed to get off at 6:25 am, my earliest start yet. At Pollards Cutting (672 km mark) and I have been on the water for almost an hour, trying to beat the heat and predicted wind change. So far I have been making good time. P.S. Marion hit a snag here and the P.S. Gem hit a snag and sunk on 6 November 1948, only a few kilometres further down the river. Unable to make it to the bank, the Gem sunk in five metres of water. All of the passengers were safely transferred to shore, though one gentleman, is reputed to have died of fright. Keighley Goodchild, editor of the Echuca Advertiser (forerunner of the Riverine Herald) published a book of poems in 1882 called ‘While the billy boils’. He also published his writings in the local paper, as was common practise at the time. Amongst his poems was one about the sinking of a paddle steamer on the Murray. Children used to learn it at school as part of their appreciation of Australian literature. It includes all the drama of fighting for the vessel and fear of life and limb. After an epic battle the crew lose, the captain gives the command to abandon ship - and everyone walks ashore. Ach, the Murray.

I sing of a captain who's well known to fame,


A naval commander, Bill Jinks is his name,
Who sailed where the Murray's clear waters do flow,
Did this freshwater shellback with his Yo, Heave a Ho.

To the port of Wahgunyah his vessel was bound,


When night comes upon him and darkness around,
Not a star in the waters its clear light did throw,
But the vessel sped onwards with a Yo, Heave a Ho.


For the winds they do rage and the waves they do roar."
"Nay, nay," said the Captain, "The fierce winds may blow,
I will stick to my vessel, with a Yo, Heave a Ho."


O Captain O Captain, we'll soon be a wreck.
To the river's deep bosom the seaman will go."
But the Captain laughed lightly, with a Yo, Heave a Ho.

"Farewell to my mates and the girl I adore,


Farewell to my friends, I shall see them no more."
The crew shrieked with terror, the Captain he swore,
They'd stuck on a sand bank, so the crew walked ashore.


By Keighley Goodchild
Goodchild was born in London in 1851. He died in Echuca in 1888, only 37. He is buried in the Echuca cemetery.  Auslit ref.

Shortly after the site of these two sinkings, I came across the most happily situated station. Kulcurna Station (formally Lindsey Cliffs) is beautifully located. Set at the base of solid vertical cliffs where the sloping land meets the plains, it is nestled in amongst shady trees. In the shade of these trees and running up to the wired-in verandas that surround the house are modest, but lush green lawns. An Australian flag is flying but all else is quiet. A kangaroo, having breakfast in the green grass raises its head to look at me as I drift past. The light reflecting off the cliffs has a warm glow to it. The feeling of serenity is enhanced by the last of the morning chorus and the feeling that out here, both in the natural and human world there is no rush yet. The bush around me is so full of the sound of bird calls that I am reminded of my times working in the Daintree Rainforest of Far North Queensland. It has an echoing quality, each sound bouncing off the next, each call set to be heard above others. It is staggering. I stop to listen, take it in consciously, appreciate. At the base of the cliffs names are carved. One has ‘97 next to it. After the people are gone the names will still be there. Maybe they have gone, grown up, left for uni, or jobs in the city, however I think once you have lived at this place, part of your being will always be there. I have since heard that the family no longer live in this house, but in a more modern one,
a little further back from the river. They rent this one out to people wanting a bit of R & R. So it's my hot tip! 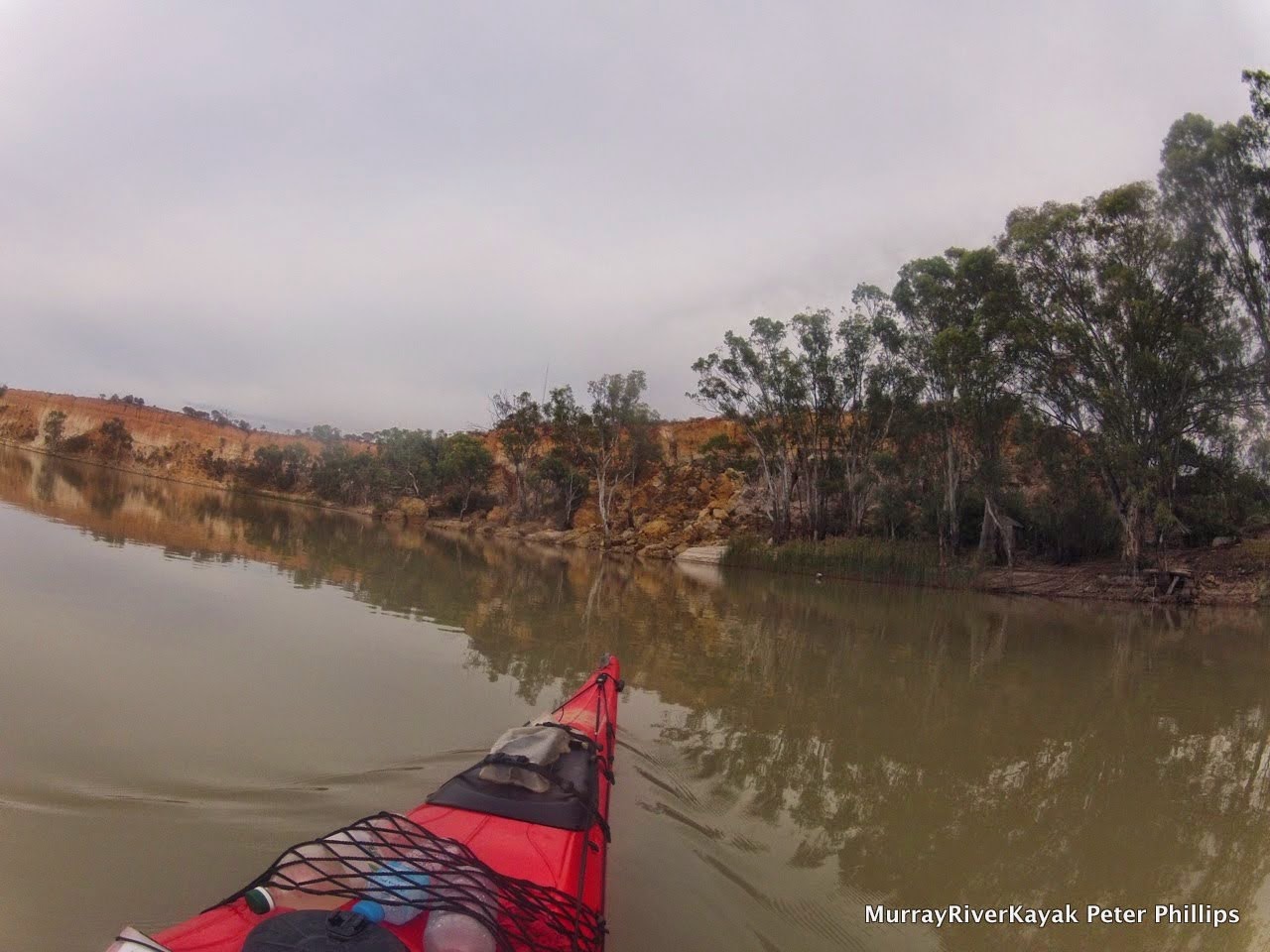 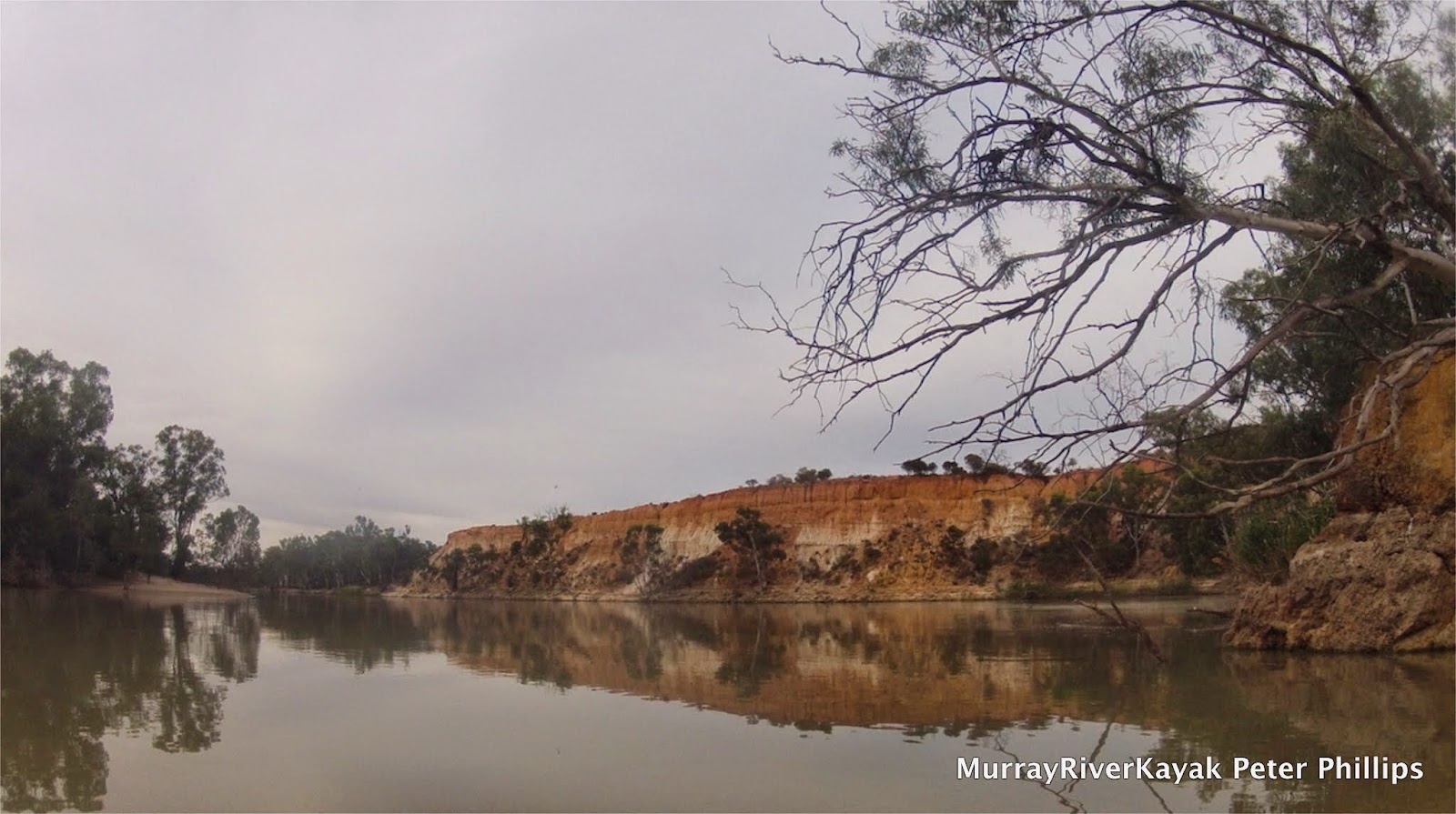 I did not think there would be much to see on today's stretch. I had trouble picking highlights from the map, but once in the water, they just kept coming. On passing the site of the ruin of Cal Lal Police Station (659 km mark), something caught my eye and I just had to turn around. All that remains of the police station is the dunny - though this was built so securely that I wonder whether it was also used as the lockup? Imagine what problems that would have caused! I have taken a photo and will upload it once reception is good enough - then you can judge for yourself.

At Higgins Cutting I got a big, two handed friendly camper wave from someone sitting in their deck chair enjoying the early morning light. It is amazing how when people are friendly it lifts your spirits. I had more friendly people today, some campers setting up for a weekends fishing, houseboat people and as always, the lockmasters. Thanks people, you make a difference! 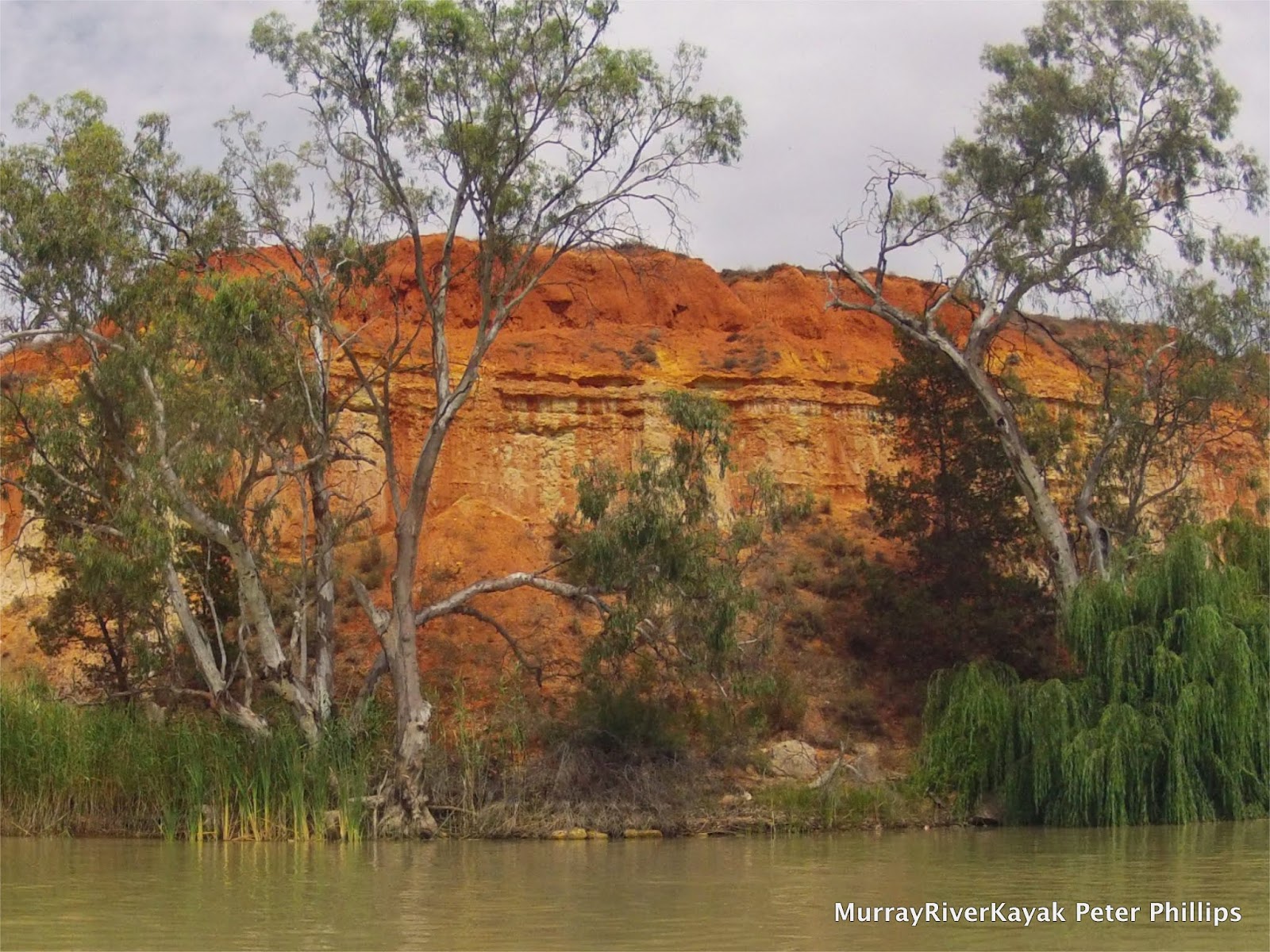 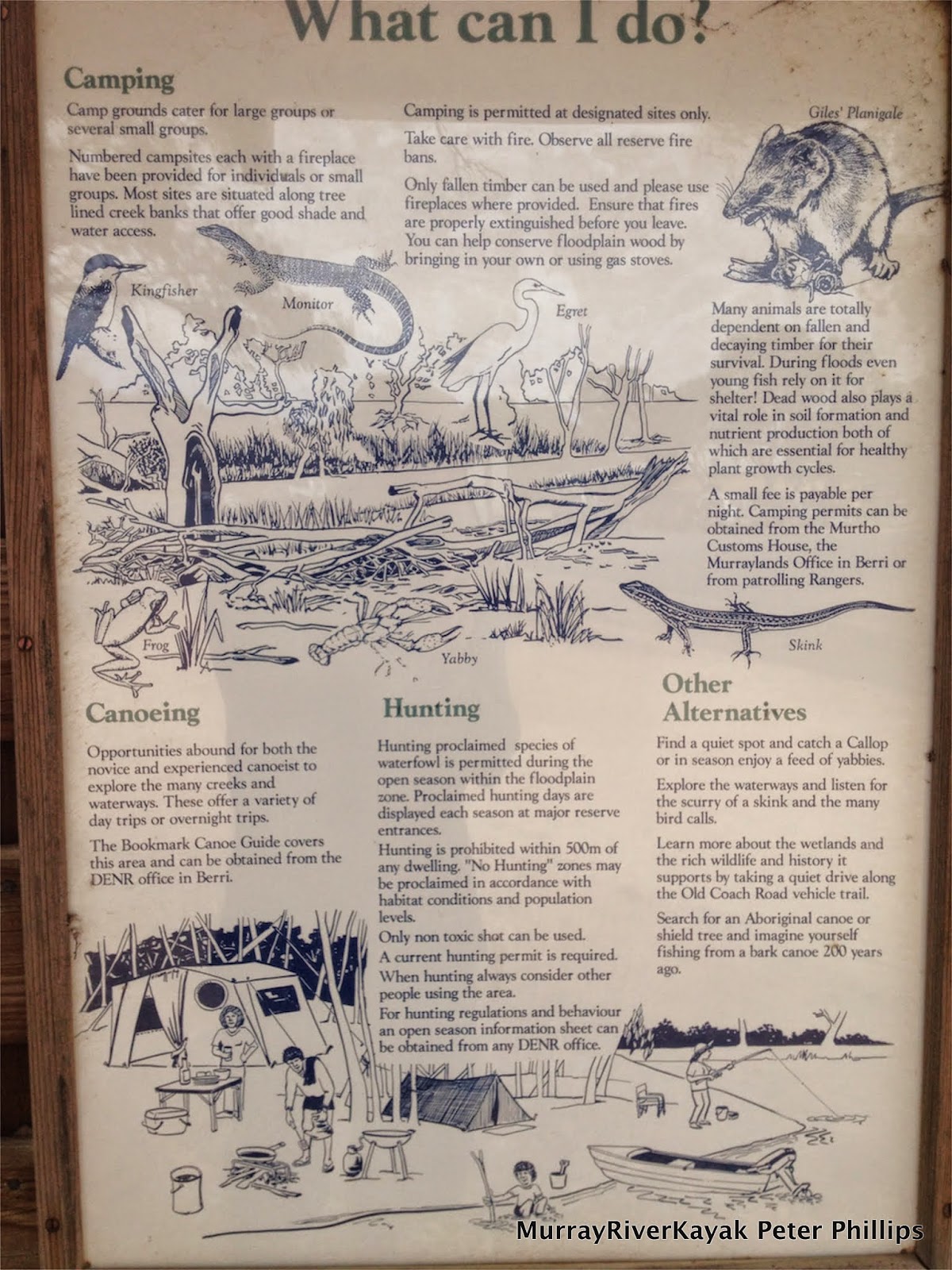 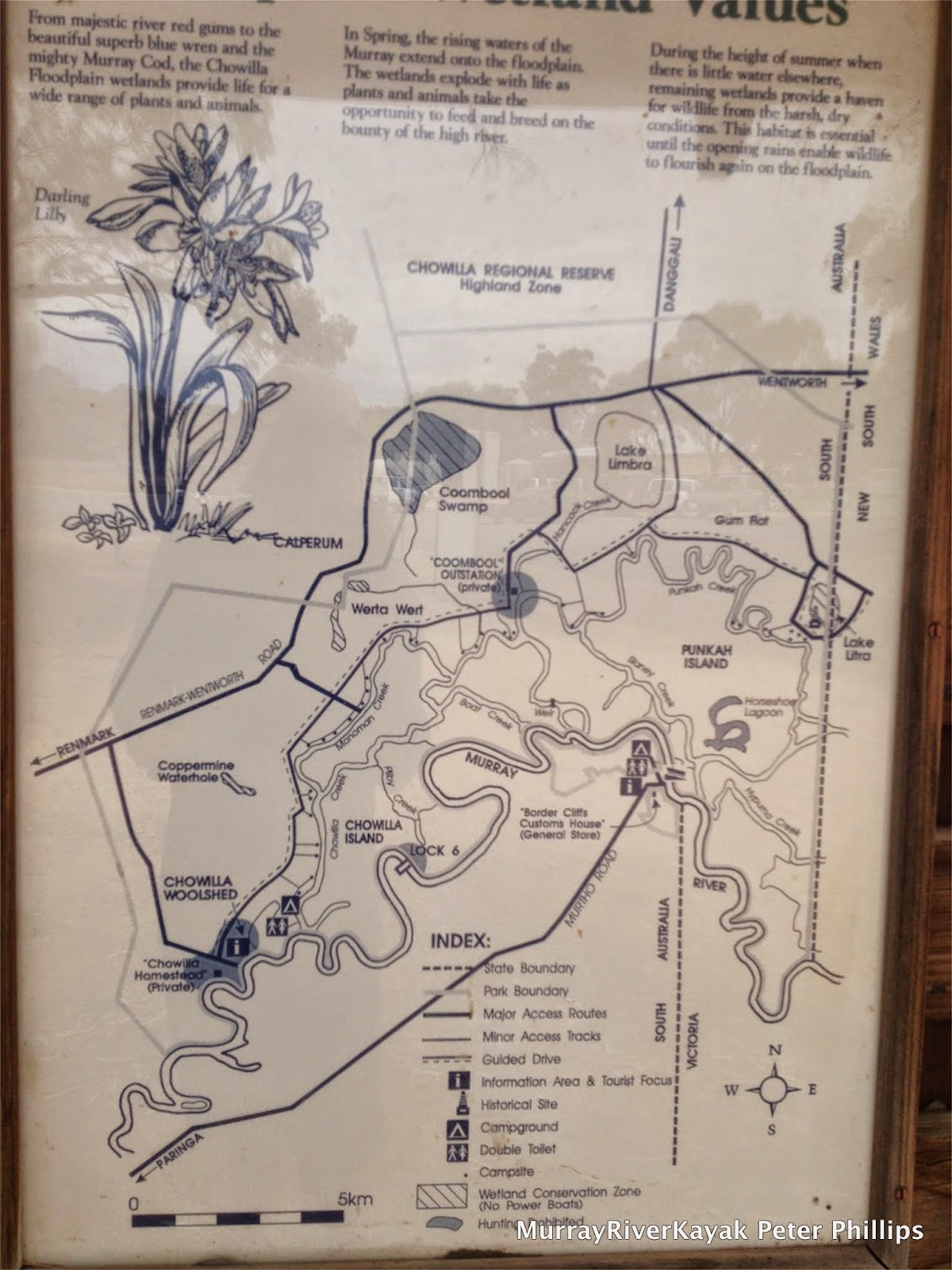 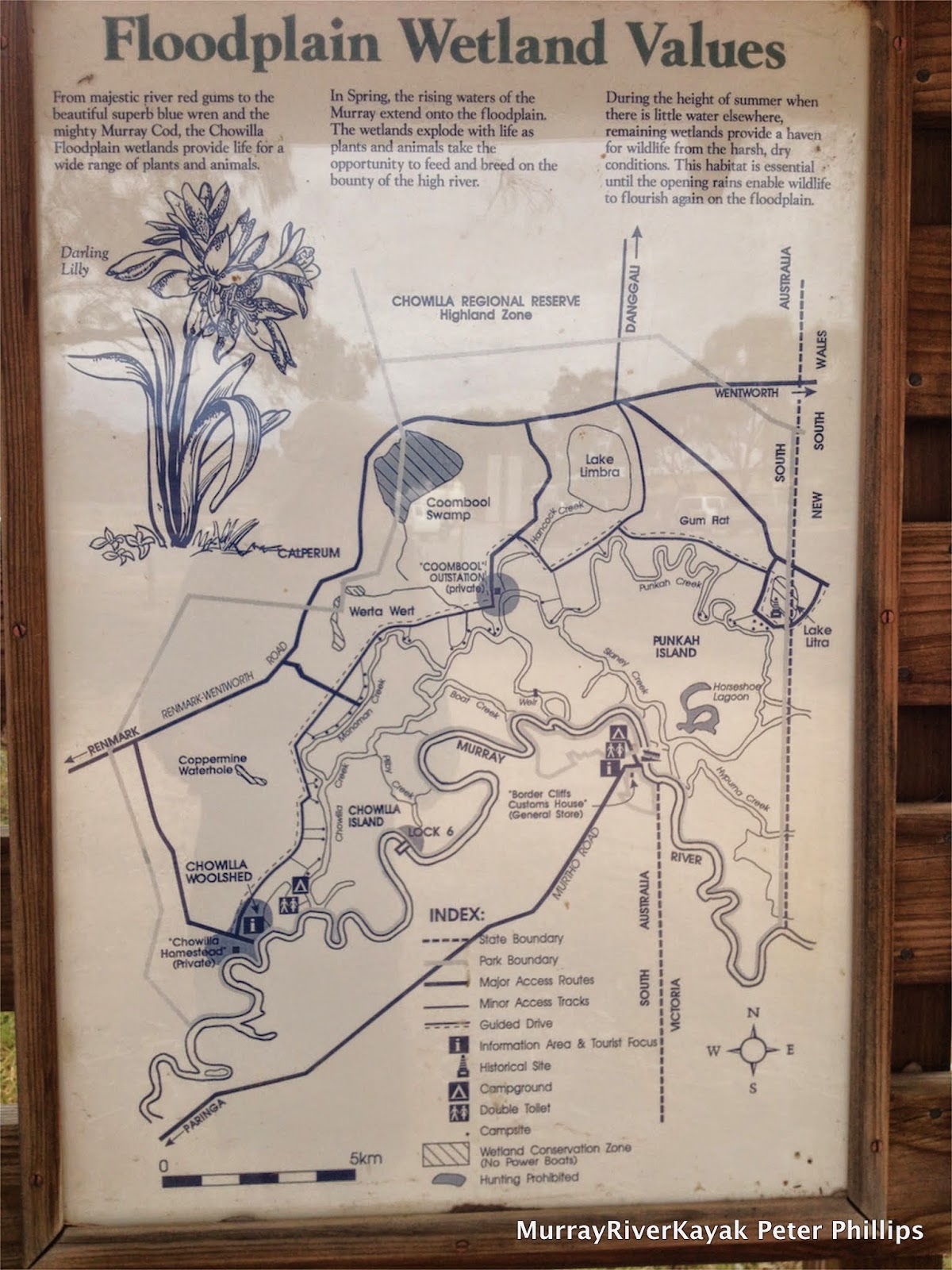 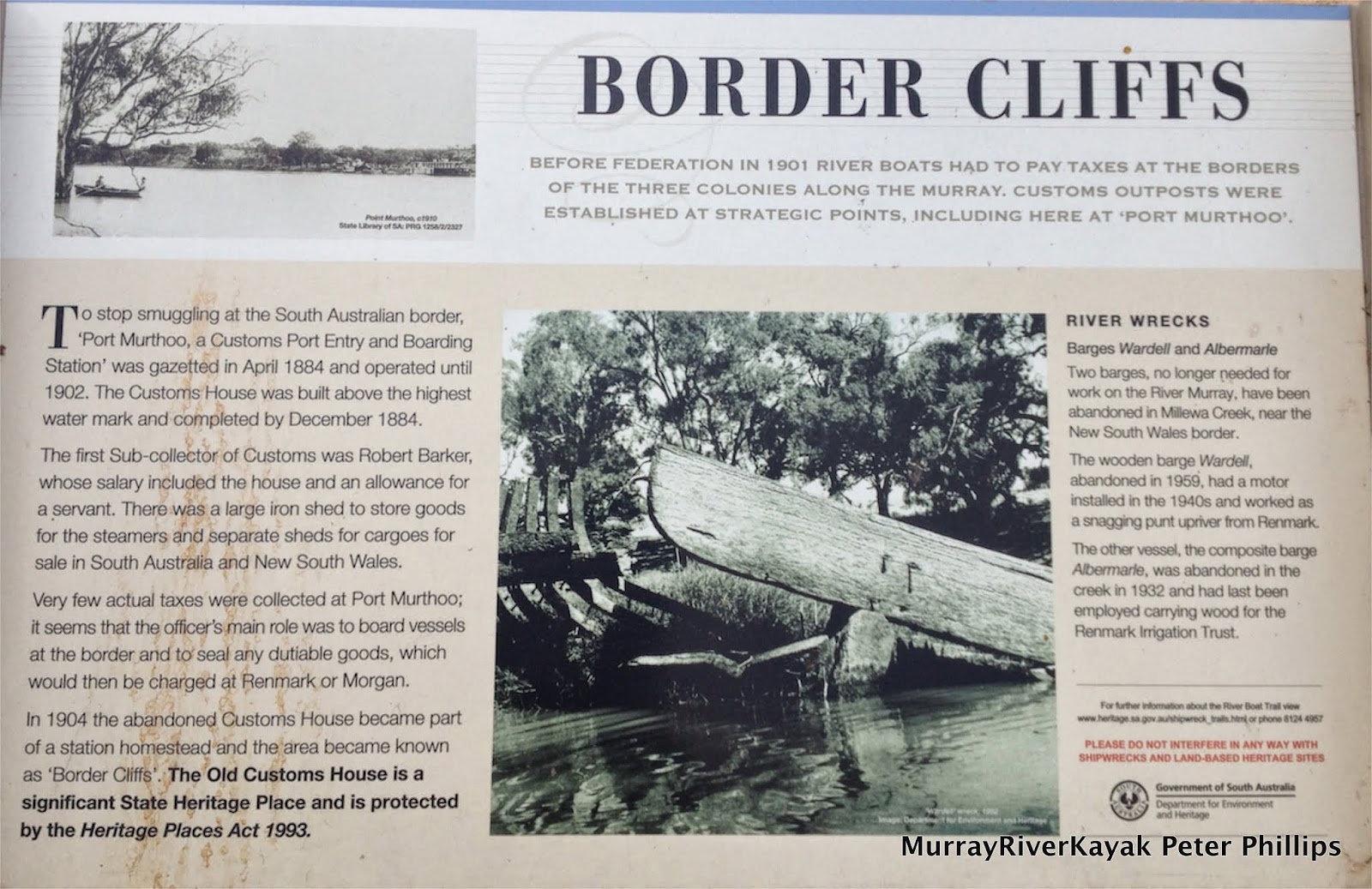 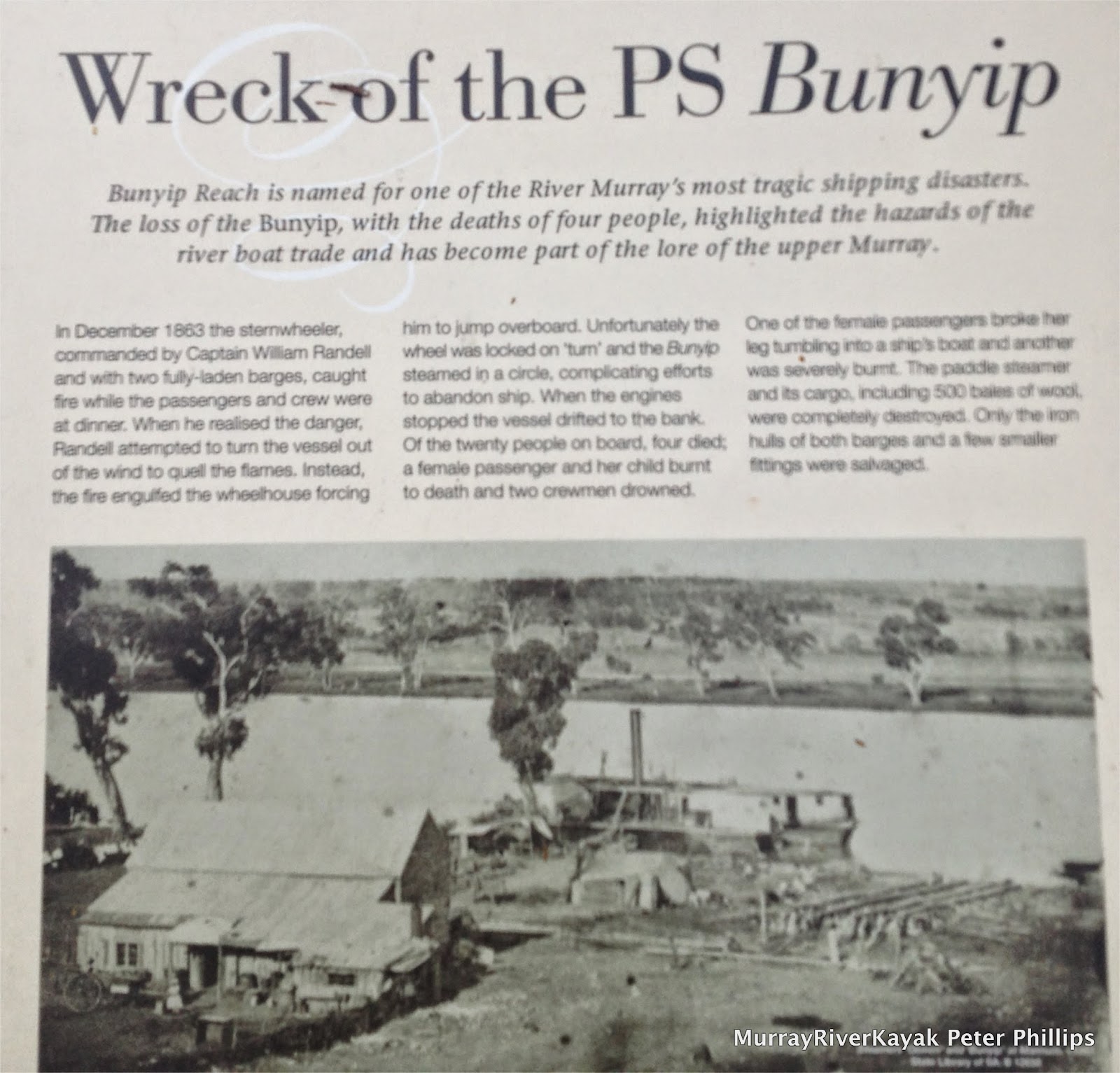 Passing the border signs was special. First, I left New South Wales, then about eight kilometres later, Victoria. In each case the border is the southern bank, so Victoria gets none of it. The borders are marked with an old fashioned wooden sign, one, easily accessible, was covered with names and dates in the pole. The sign was unmarked. On the Victorian side, the sign was in a swamp, which meant no-one could get to it. I am not sure which I prefer. I think the one with the signatures, because I can empathise, I too am proud of getting this far.

Camp at Wilkinson's Cutting is another beautiful site with a view of the red cliffs below Wilkadene station. It has been a hot day and a strong dry wind is blowing. Kids from the station are cooling off in the water. I can hear their excited shrieks carrying through the air as they plunge and splash in the refreshing waters of the river. I am off to do the same.

More from this expedition:

More information about topics from this page:

Peter Phillips
PhD Candidate researching Murray River floods. 13 years expat experience living in Germany. Worked in Australia, Africa, Antarctica and Germany. Enjoys the environment, my family, people, travel, cultures. Inclination towards adventure. In 2012 (low river), and 2016 (flood) completed a kayak journey of 2,400 km on the Murray River from its headwaters to the sea and continue to explore, document and share expeditions on the rivers of the The Murray Darling Basin. Uses these experiences to understand rivers, river ecosystems and the communities that depend on them and encourage people to discover and share what they value about their environment. Rivers bring life and connect people. Education should be like that too.

Peter Phillips
PhD Candidate researching Murray River floods. 13 years expat experience living in Germany. Worked in Australia, Africa, Antarctica and Germany. Enjoys the environment, my family, people, travel, cultures. Inclination towards adventure. In 2012 (low river), and 2016 (flood) completed a kayak journey of 2,400 km on the Murray River from its headwaters to the sea and continue to explore, document and share expeditions on the rivers of the The Murray Darling Basin. Uses these experiences to understand rivers, river ecosystems and the communities that depend on them and encourage people to discover and share what they value about their environment. Rivers bring life and connect people. Education should be like that too.